I stumbled across this in a games exchange shop near me, and despite initially walking away, it was less than an hour before I was back This has been on my "want" list for some time, but they never come up for sale at a reasonable price. I already have the Sinclair ZX Spectrum +2 in my collection, but admit it, you'd do the same. This is one of the later Amstrad models which was released in 1987, where they took the 128k Spectrum, changed the ROM slightly, added an additional DOS ROM (+3DOS), and bolted on a 3 inch disk drive, however there is a tape input for connection to a normal tape recorder so you can load software from cassette, although changes to the ROM meant some games would not work. But this machine could run CP/M, which was popular in the business world at the time You can see in the image below the boot screen is slightly different, it lists the available drives, A: is the floppy drive, and M: is the RAM disk 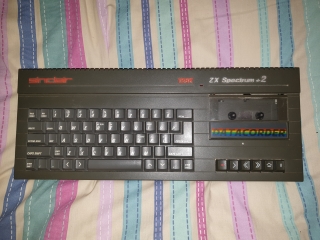 The floppy drive is taller than the keyboard, which is shifted to the right slightly

There's not much going on on the bottom

The front has the floppy drive 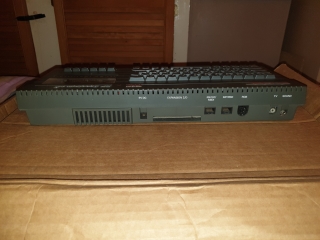 The rear of the unit has an extra edge connector to the +2, of which half is for another disk drive, and the other half is for a printer. There is now a DIN style power connector, and the keypad socket has been re-labled AUX and the RGB now has the Peritel moniker. Finally the sound connector now has an input for a tape recorder

The PSU is different to all the other models, one would assume the disk drive needs additional power

I now need to go buy some discs, but I do have a cassette recorder available...

And finally we go back to a simpler time when people used to label their plugs for easy identification when under the table, or while round the back of the TV... Update I was asked to provide some side by side comparison shots against my +2, so here they are...

Left side joystick and reset button

With my Raspberry Pi powered Spectrum

The animated "HELLO THERE I'M A +3" Easter egg.In +3 BASIC type CODE RANDOMIZE. Press enter then quickly hold the letters C, J, and L together to see this screen

Close up of the disk drive label Updates It has been a while since I've seen a Sinclair Spectrum at a car boot sale, many many years in fact, but I spotted this beauty at a local car boot sale/sunday market and obviously I immediately picked up this "boxed" Speccy for a massive £25, apparently the seller was originally asking £80, but by the time I got there he had dropped to £60, I offered £20, he countered with £30, but settled for £25 It was only the machine itself, no PSU or other accessories, obviously I was unable to test it at the car boot sale, but I was willing to take a punt for £25 as I paid £100 for my existing Plus 3 He did say if it was still available at 12:30 I could have it for £20, but I wasn't going to wait two hours to save £5

But the polys are good, which is nice

Typical Spectrum Plus 3 that we all know and love, there is a missing rubber foot and no serial number label

All ports present and correct, the machine is currently untested, I need to get my existing Plus 3 out and get testing

The side Sinclair joystick ports and reset button, this Plus 3 seems to be exactly the same as my existing Plus 3, I can't see any differences at all around the case apart from a missing rubber foot and serial number labels I can't wait to test it For more retro hardware check out my online museum here