Here is my Sega Saturn, I swapped an old TV for this console. This one had the same problem as most Saturns (and Dreamcasts) which concerns the pins connecting the two circuit boards inside, the pins get pitted and the sockets become loose and don't connect as they should. This means the console will randomly freeze, or reset, or fail to boot, especially when accessing the disc After "some" time in storage, it would appear the pins are giving trouble again as it boots to the initial set up, but doesn't boot any further. But no drama, the magic drop from a few inches has resettled whatever was giving me grief, and now the console boots properly. For more information, here is its Wikipedia page.

With no disc in the drive the Saturn boots to the audio control screen, this also has options for system settings etc. You can also hide the icons and the space ship appears. The square boxes at the sides of the screen change size in time with the music and the star field scrolls towards you.

Here is the top and bottom of the console, you have the usual power, reset and disc tray open buttons, some revisions of the Saturn have different shaped buttons. The bottom just has the labels.

The front has two controller ports, the rear has the AV out socket for connection to a TV or monitor (I have a RGB cable with mine), the power lead socket (standard figure 8 plug), and a "Communication connector", whatever that does, I don't know. On the left is a flap, which hides a small CR2032 battery, this keeps the game saves in the small amount of storage memory the Saturn has.

The sides are just plain, nothing to see here

You may have noticed there's also a cartridge port on the top, this was for a storage expansion cartridge, which meant more space for game saves.

I have two controllers and one light gun, there are no scary warnings about using the gun in real life outside, as there is on the Dreamcast light gun.

One day, while searching through a box looking for something else, I found a 3rd party controller for my Saturn, I didn't know I had this, and I've no idea if it works.

Here are some pictures of the Saturn in action 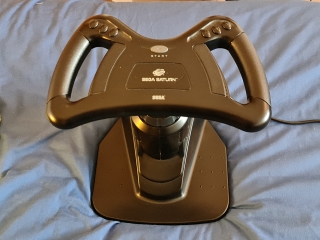 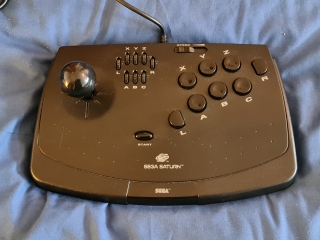 That's it, for more retro goodness, check out my online museum