I have wanted an Atari 2600 for longer than I can remember, so when a "not working" boxed console appeared on ebay, I fancied taking a punt on it, after all, it was boxed, came with a game, two joysticks, one of which was a Konix Speedking, and a universal power supply. So if it didn't work and was beyond repair, I could just pick up a working console separately.Besides, I paid less for this than for a working Atari 2600 Jr console

So, here is the box, it's seen better days, but it'll do

Here's the console, first thing you'll notice is a hole at the top by the power socket, this is due to a screw being over-tightened and snapping the mounting post off.Otherwise, you can see the console has a power switch, a colour/black and white switch for the TV type (people still used black and white TV's back in the day). The cartridge slot, and the select and reset buttons. A power LED within the red stripe is also presentThe fact screws are missing on the bottom suggests someone has taken this apart and tried to "fix" it

This is the universal power supply that it came with, it looks safe doesn't it? I tested it through my isolating transformer and it's dead Jim, so straight in the bin it went

Here are the joysticks, the left is a cheap and nasty joystick which seems to reset the Atari when both fire buttons are pressed together? Next is the Konix Speedking, It's missing the plastic joystick, but works fine, actually it feels very nice to use. I wonder if you can get parts?

The Atari power supply specifications are, 9V DC 500mA, using a 3.5mm jack plug with a positive tip. The only PSU I had within reach that fitted those specs was a Spectrum PSU, but it has the wrong plug fitted. No problem, I'll just make an adaptor...

Once all connected up and switched on, the LED on the Atari lit up, halfway there. And after what seemed an eternity waiting for the TV to tune in a picture appeared, a bit fuzzy, but WOOO HOOO! However, the joysticks were unresponsive, and so were the buttons on the Atari

So lets take it apart, as suspected the buttons on the Atari are connected to the board by a membrane tail, and this wasn't connected. So once plugged back in they worked, and once the select button had been pressed, the game would start and the joystick worked as well

But the picture was now a lot more fuzzy than previously, which kept causing the TV to mute the screen

So on taking it back apart again, I discovered the RF cable wasn't actually connected to the socket, the middle wire had broken off

So I just bypassed the short extension to test the output

Success, it all works!

This is what it looked like while fixing the problems

However, I have spotted a broken pin in the left controller port, although the joystick plugged into it works, I will have to find out what that pin does Software I only have one game at the moment, but it's guaranteed I will buy more soon... Combat

Update I have bought some more games, and a new power supply... Asteroids

All three of them are boxed, the cover art on the boxes is great, but as always, the cartridges needed cleaning with a cotton bud and some IPA before they would work, with Berzerk being the most difficult to get running

And I dug out my old CRT for "testing" reasons, here it is with Defender proudly displayed Another update I have bought another game Adventure

And another... Pole Position

Berzerk (NTSC version)My copy of Berzerk above stopped working. NTSC versions of games work fine on PAL machines, but due to the way software runs on the Atari, the colours are wrong

Hardware update I bought this at the Bristol Retro Gaming Fair at Temple Meads Station, it is the type of joystick featured on the box

It's been a while since I held one of these, I don't remember them being this small, I put a Fire TV remote in the picture for scale. Also both paddles are wired to the same plug, I don't remember that either Even more hardware updates Who wants more paddle controllers, and joysticks, and another 2600Jr?

More paddles, one of them has some damage to the cable 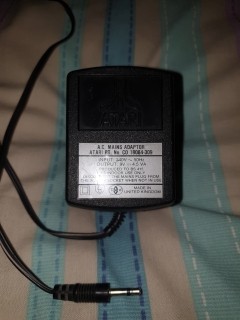 And I finally got round to testing the "untested" 2600Jr and it works perfectly, so happy days More software updates I bought some more games in a games exchange shop in Street (by Glastonbury)

Missile Command More updates I was recently donated some games and another 2600Jr, I already have some of the games, but all donations are welcome

Star Wars The Empire Strikes Back

E.T. The Extra Terrestrial (this has an X drawn on the label, I haven't tried it yet)

Two more CX40 joysticks, but are missing the stick covers For more retro hardware check out my online museum here