My Amiga is currently not working, it is suffering from "Death from Varta", but it is the system I spent most of my teenage life with, so it will be either repaired or replaced at some point. Update: Read about what happened here Amiga A500 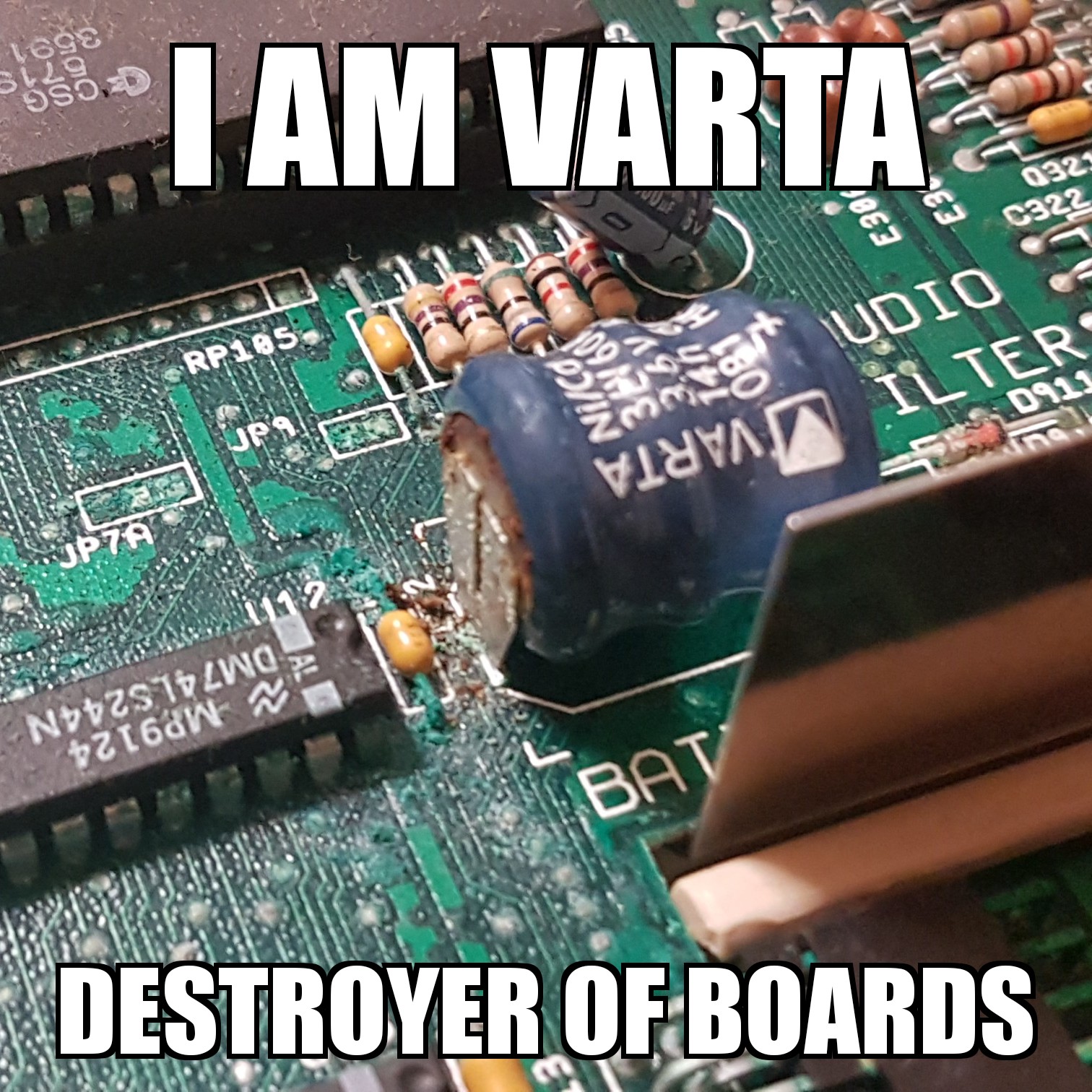 I have neutralized the battery acid and cleaned up the board, and as usual the Gary socket bore the brunt of Varta's rampage, so the socket was removed and replaced, the Gary chip had it's legs cleaned, but the Amiga still only outputs a black screen, so there must be some trace damage on the board. The power LED doesn't go bright, so something is stopping the CPU from running at this moment But that won't stop us from looking around the Amiga and all the other goodies I have. BTW, my Amiga was part of the Cartoon Classics pack

On the left of the Amiga is the side expansion port, usually for a Hard disk or CD ROM drive

Underneath is the bottom expansion port, normally used for memory expansion

The original power supply died, so this is a replacement, the PSU doesn't weigh much, so must be a switch mode power supply A520 Modulator

If you wanted to connect the Amiga to anything other than a monochrome or RGB monitor, or a SCART television, then you needed this. It stuck out the back of the Amiga by some distance, and you needed the phono cable to route the audio to the TVHowever I did eventually get a Phillips CM8833MkII monitor. Display cables

I had obviously broke the RF cable, so had fitted a plug to what little cable was left, then used an extension from a VCR, and here is a home made RGB to SCART cable Roctec Roclite Floppy drive

Like most Amiga power users I had an external drive, you could daisy-chain up to four disk drives to the Amiga Mouse x2

My main mouse was a 3rd party mouse, but that's with my Atari STE at the moment, so here are two standard Amiga tank mice Quickshot Python 1 Joystick x2

I had these joysticks, they were great

Note the switch, setting it to Sega allowed you to use two fire buttons in games on the Amiga 1Mb Chip RAM expansion

This took a beating from Varta, so I've no idea if it works Centronics printer cable

I used to have a printer, but it broke and was disposed of DocumentationThe Amiga and Workbench user manuals

Various other documentation and leaflets that came with the Amiga

The A520 modulator user manual

The instructions for the 1MB memory upgrade

The Amiga came with a special copy of Amiga Format, these postcards came with it

The instructions for the Roctec floppy disk drive

If you had an Atari ST you could exchange the disc, and look at what I wrote inside the cover

Random floppy disks I won't bore you with every disk, you know what most of them are, all I will say is there's a lot of "blank" disks here. The following disks here are the most notable

Workbench 2.0This is the GUI software that came with the Amiga

Relokick 1.3 and Workbench 1.3Relokick downgraded the Amiga to Kickstart 1.3, this made some games work, I got hold of Workbench 1.3 for that garish blue and orange feel

A whole load of demos and PD softwareYou would order these from adverts in the back of various Amiga magazines, usually about 50p a disk

Some more PD disksYes the Amiga 500 could run a Spectrum 48K emulator. Slowly, but it did work

And finally, the Lotus Turbo Challenge 2 disk that came with the Phillips monitor

And that's my Amiga journey, for more retro hardware check out my online museum here