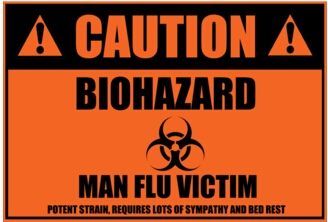 I have been ill, really ill. Ill enough to take almost a week off work, and that's never happened to me before. no idea what it was I had, but i've been calling it "Super gross man death flu".Most people would probably like five days in bed, but it wasn't that much fun for me.Started of with just generally feeling crappy on Friday afternoon, by the evening I could hardly stand up. Then it developed into a headache, blocked and runny nose, being both hot and cold at the same time, and just being unable to get out of bed for several days.
Everybody thought I was faking it!
Why would I want to fake that?